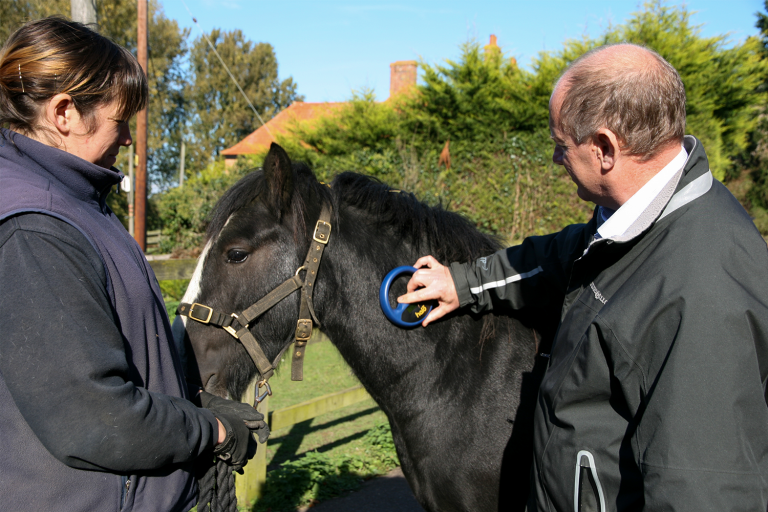 On Tuesday 18th May, World Horse Welfare gave evidence to an Environment, Food and Rural Affairs (EFRA) Commons Select Committee enquiry on the movement of horses across international borders. As a result of the UK having left the EU the movement of animals across borders is facing a raft of regulation changes. Along with two other members of the equestrian sector, Roly Owers, Chief Executive of World Horse Welfare, was interviewed in front of a cross-party committee gathering evidence to develop a report with recommendations for Government over the effects of moving horses for racing, other equestrian sport, leisure, breeding and slaughter.

Roly Owers said: “In the first few months of 2021 there have been long delays for horses at Border Control Posts, especially at Calais, with some horses being held for hours, or even longer. The number of horses moving in the early months of the year is a third of normal levels and yet the capacity has already proven too low. The infrastructure, resources and paperwork-based process are not fit for purpose and the delays represent a significant animal welfare issue, which will only increase as summer heat builds, especially if cooler overnight movements are not possible as the border control posts are only open from 8am – 6pm.

“Developing a Common Veterinary Area with the EU would significantly simplify and speed up compliant movement of horses across borders. This must be underpinned by digitisation of equine ID, which World Horse Welfare as part of the British Horse Council has been advocating for a long time, and effective intelligence-led enforcement, with well-resourced enforcement agencies working in collaboration. This will streamline the process, while preventing the movement of illegal, non-compliant movements of horses, many of which we believe end up in European slaughterhouses. Digital, not paper, is the way forward and for all horse owners we need the carrot of recognising the benefits of a good digital ID system, and the stick of effective enforcement.”

World Horse Welfare’s contribution follows on from a previous written submission as part of the British Horse Council to the equestrian section of the inquiry, which covers impacts on animal health including disease outbreak, economic interests, the capacity of the UK to adapt to new regulations, and the illegal movements of animals across borders and later sessions dealt with other animals, livestock and pets.

Roly Owers was joined by Ross Hamilton, Head of Public Affairs, British Horseracing Authority and Jan Rogers, Director of Research and Policy, The Horse Trust in the session which considered a number of areas surrounding animal transportation.

Moses has been transformed into a stunning, cheeky young cob and is now Sponsor a Stableyard cover star.