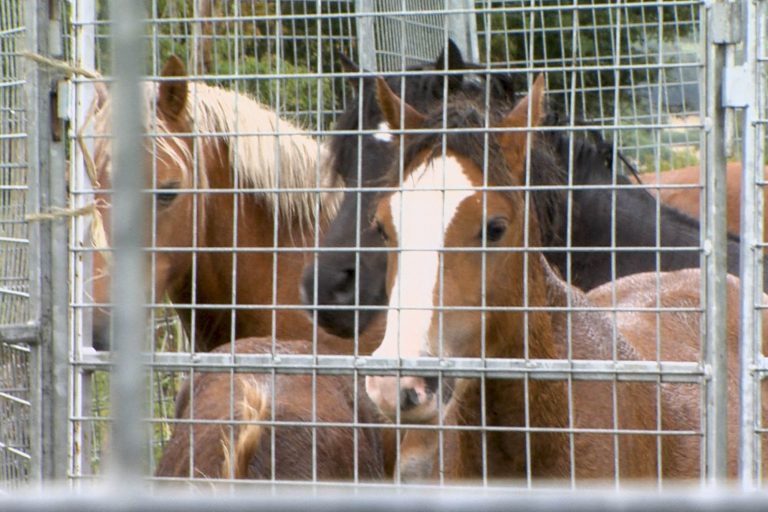 A woman has been jailed for 18 months and banned from keeping all animals for life after being prosecuted for numerous animal welfare charges. In 2015 investigators found livestock at Ingst Manor Farm in terrible conditions, surrounded by dead and dying animals.

The owner had arranged for another person to manage her farm in exchange for allowing him to keep his horses there. However, he neglected all the livestock, including cattle, pigs and sheep as well as his own horses, so much that when the RSPCA arrived they found “a total animal welfare disaster”. The farm manager was jailed in June 2018 for a total of 32 weeks and banned from keeping farm animals for life.

“The situation with the horses was that they were running in several herds, with no clear fencing down there. There was indiscriminate breeding going on and the horses were running amok all around the farm. As well as the various carcasses that we found on the premises, the horses hadn’t been wormed, their feet hadn’t been attended to and some of them had weight issues as well.”

A multi-agency operation took place in 2015 to remove all the animals from the site to be cared for properly, with the RSPCA, Redwings, HorseWorld, The Donkey Sanctuary and World Horse Welfare all working alongside each other. World Horse Welfare Field Officer Tony describes how the operation unfolded:

“On the day we went to remove them we had various charities there, including Redwings, Horse World, the RSPCA, and World Horse Welfare, so we could cope with the number of animals there. We were split up and working in our respective groups – some people were doing the equines, some were sorting out the cattle, and other people were looking after the pigs and the sheep.

“What we decided to do with the horses was to bring them in in their herds rather than try to separate them, so slowly, slowly we brought one herd in at a time. We had assistance from The Donkey Sanctuary with their lorries and were then able to transport the horses to a safe place.

“As a welfare organisation for us the best outcome would be that obviously the owners of these horses never get them back and never get to look after any other equines, so that we can take care of these horses and it doesn’t evolve once again into a large equine case.”

Five of the ponies were removed to World Horse Welfare’s Glenda Spooner Farm Rescue and Rehoming Centre in Somerset. Sadly, two of them could not be rehabilitated and they had to be put to sleep. Thankfully, the remaining three ponies flourished and went on to be happily rehomed after being successfully rehabilitated.

Could you spare a few pounds today to help us rescue and rehabilitate more horses and ponies in need?

A West Sussex man who neglected horses in his care has received a three month suspended jail term and been banned for life from keeping equines.

A man from Redcar has been sentenced for causing unnecessary suffering and failing to meet the needs of four horses.