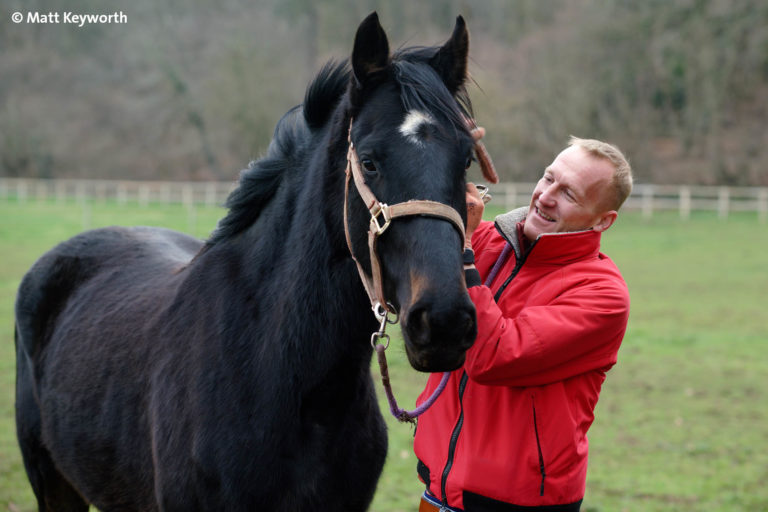 The story of me and Romeo started back in 2015, although I didn’t know it then. It began when I was called out to a welfare concern after a call to our Welfare Line about a thin horse. When I arrived, I found a group of horses at the site and although one was lean it was clearly an older animal who was being cared for.

I had a chat with the owner and was happy that he was doing everything he could for his horses. However, sadly, later in the year the owner’s health deteriorated and and he called us to ask for help as he was unable to provide the necessary care.

Romeo was five months old at that stage and came into our care with his mother and several other horses. As he grew up at our Hall Farm Rescue and Rehoming Centre, Romeo turned into an inquisitive, playful youngster, who was very sweet as well as quite exuberant!

Once Romeo was ready to find a new home, he was put up on our rehoming site. I saw that he was on there and thought that whoever took him home would be a very lucky person. However, Romeo was still at Hall Farm when I next visited a while later.

Being a friendly boy, Romeo came over to say hello when he spotted me and, as they say, the rest is history! He was growing into a really smart young horse and clearly had a great temperament, so I put in an application for him which turned out to be successful.

Romeo arrived with me on 14th February 2017, so we celebrated our two-year “rehomeaversary” on Valentine’s Day this year. He’s a real character and loves exploring – we’ve walked miles together in the past two- and a-bit years. I backed Romeo after he turned four in May and am really pleased with how he’s gone so far. He’s progressing nicely and I’m looking forward to seeing what the next stage of our adventure together brings!

A national week of action encouraging people to speak out and challenge the stigma of the UK’s most prevalent equine disease is returning this year.

New report reveals that almost a half of councils in England do not have a single Animal Welfare Officer in place dedicated to dealing with animal welfare issues.

A man from Leeds has been jailed for causing suffering to a pony he overworked to the point of exhaustion at last year’s Appleby Horse Fair.