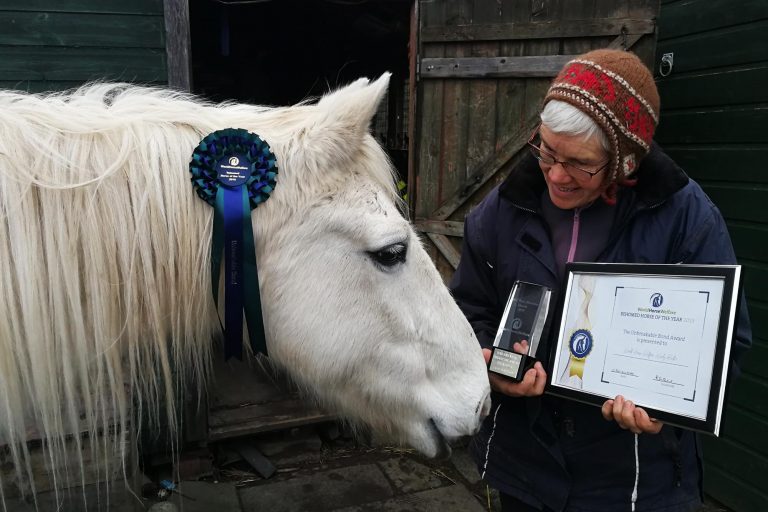 The three winners of our Rehomed Horse of the Year 2019 competition were announced on 31st January 2020 and each celebrates the amazing bond the horses have with their rehomers. This year’s competition featured three categories, Unbreakable Bond, In the Picture and I Wasn’t Expecting That! with each focusing on a different aspect of the many talents and benefits that rehomed horses have to offer.

The Unbreakable Bond category celebrates the really close and long-term bond between a rehomer and their horse and this year’s winner, Jackie Robertson, was presented with her award at the British Horse Foundation Awards Dinner and Ceremony in London in early January. The winning horse, originally named World Horse Welfare Windy but now known to Jackie as Ruith (Ru to his friends), has been with her for 24 of his 26 years. He was initially used as her daughter’s horse, but Jackie started to ride him herself about 10 years ago. When the time came for Jackie to hang up the saddle after Ru let her know that he was getting a bit stiff and no longer felt up to carrying a rider, she began taking him out for daily walks in order to keep his arthritic joints moving.

“We walk along together, two old codgers side by side, with Ru occasionally nudging me with his nose, or stopping to scratch on a tree or nibble a leaf. It’s a privilege to share and enrich his twilight years and try to repay some of the joy that he’s brought me over the years – hopefully he’ll be with us for a few more yet. Thank you for the opportunity to celebrate Ru.”

“I loved all the Unbreakable Bond nominees but the story that really warmed the cockles of my heart was Jackie and Ru’s. Not only is it the longest relationship but I really loved how the friendship has evolved over the years – from a two-year-old who developed into a great horse for Jackie’s daughter to ride, then hacking pal and confidence-giver to Jackie herself before the two of them hung up the saddle to become walking chums and companions – the line “two old codgers side by side” really made me smile. It’s the dream really, to have a horse that grows with you and remains forever a much-loved and treasured member of the family and, to celebrate that, I think Jackie and Ru are very worthy winners.”

Annie and Jessie Weir and World Horse Welfare Nettle won the In the Picture category judged by horse photographer Matthew Seed with the adorable moment captured when Nettle had her first polo.

“She loved her first polo, but at first it was a weird sensation for her and she made this very funny face! She has been so sweet since the day she arrived and has made many more lovely funny faces which we unfortunately have not managed to capture on camera.”

“There is such joy in Nettle’s face at something as small as a polo mint. To give back this simple joy with the care and kindness of World Horse Welfare and those that rehome is what it’s all about.”

The final category, I Wasn’t Expecting That! was judged by YouTube star ThisEsme and was won by World Horse Welfare Sam, who was rehomed by The Horse Course and nominated by team member Rene Dewhurst. The Horse Course is a leader in equine-assisted human therapy successfully using horsemanship to address troubled individuals and troublesome behaviour. Sam is one of the horses used in this therapy.

“I really like the story of Sam, a cheeky horse full of personality that helps and inspires others, a great story.”

“Sam is a cheeky chappie and much loved for his sense of humour. He’s invaluable for motivating those hard-to-engage participants because they are stuck in conventional talk-based therapies. I can trust Sam to get them smiling despite their own challenges. He’s particularly keen on playing ‘football’ with a big green ball and has developed a habit of kicking it, then deciding it was just the thing to do a somersault rolypoly over – a trick that never fails to raise a laugh in even the most anxious and depressed participant. If that doesn’t work to make them smile, he’ll try using the tops of cones to give his tummy a good scratch or just empty the grooming box one brush at a time in search of a treat. If nothing else is going on he’ll put himself on the pedestal in the hopes of a tasty reward or just to make a point. He’s the class clown and we all love him for it!”

These three category winners are being put forward for international showjumper Joe Stockdale to decide the Supreme Champion Rehomed Horse of the Year, which will be announced later in the spring.

“Our four Rescue and Rehoming Centres are constantly busy with new arrivals desperately needing our help. In 2019 we managed to rehome 310 horses and ponies but these have been replaced by new admissions which has kept the farms at capacity throughout the year. Anyone rehoming one of World Horse Welfare’s horses or ponies not only receives the full honest facts about the horse and a lifetime of support – and the rewards of knowing that they are giving that horse perhaps its first ever loving home – while making space for another vulnerable horse to receive the care it needs.”

Feeling inspired by these stories? Check out our horses and ponies who are ready for rehoming now.

Autumn worm control: which worms should you test for?

Field Officer Chris Shaw explains which worms you should be testing for in the autumn – and why it’s so important to test before treating.