25 thin and neglected foals, stallions and pregnant mares were removed from an isolated farm in Aberdeenshire. 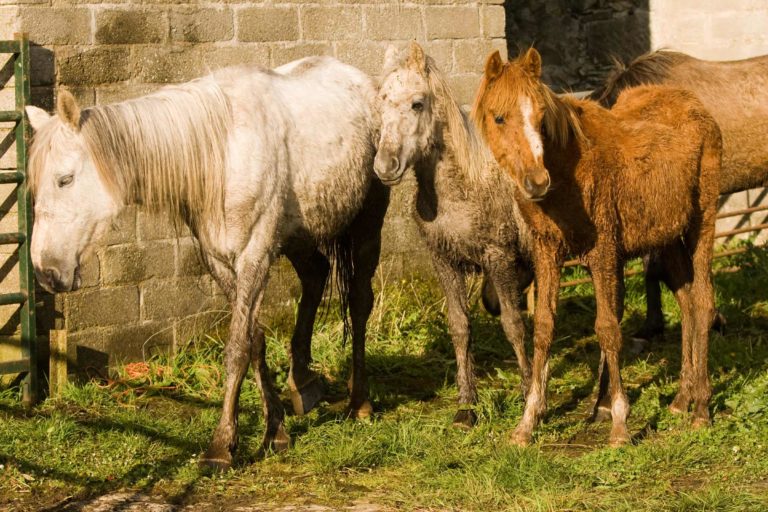 It was one of the worst cases of horse welfare abuse in UK history. 32 horses, ponies and donkeys were found dead and over 100 were removed from Spindles Farm in Amersham in January 2008. Five members of the same family were found guilty of causing unnecessary suffering and are due to be sentenced at Aylesbury Magistrates Court on Friday 12th June.

As we wait to learn their fate, leading international horse charity World Horse Welfare, which took 11 of the Amersham horses, is revealing shocking new images of horse cruelty and suffering at a farm in Aberdeenshire, which bear a gruesome similarity.

World Horse Welfare receives calls every day to help horses that are the victims of abuse and neglect and sadly the case at Amersham is not an isolated incident. Just three weeks ago, 25 thin and neglected foals, stallions and pregnant mares were removed from an isolated farm in Aberdeenshire. The semi feral horses had not been handled or received even the most basic of care for many months and were forced to wade through thick mud to reach what little grazing was available. They had been allowed to breed indiscriminately and the body of a still born foal had been left where it lay. A weak and collapsed filly was also found and had to be put to sleep.

The plight of the horses was discovered after a concerned member of the public called World Horse Welfare’s free UK Welfare Hotline. Field Officer Doug Howie was sent to investigate and was shocked at what he found. Doug knew that in order to get the horses signed over and ensure their safe removal, he would have to keep quiet about a terrible discovery he had made at the premises.

“Whilst walking around the farm, I noticed a terrible smell coming from one of the barns. I went to investigate and found the rotting corpses of large number of horses. The smell was overpowering and it was difficult to tell how many bodies were there.

“I kept the discovery to myself for the time being so as not to jeopardise the safe removal of those horses that were still alive. I wanted to do all I could to prevent them from suffering the same fate.”

On Friday 22nd May, Doug, accompanied by three further Field Officers and a team of staff from World Horse Welfare Belwade Farm in Aboyne, arrived at the location with a fleet of horseboxes to remove the horses. Once safely on board and en route, Doug immediately contacted the Aberdeenshire Animal Health and Welfare department to inform them about the corpses in the barn. A report has since been submitted to the Procurator Fiscal.

On arrival at World Horse Welfare, the horses were assessed and treated by vet Ramsay Duncan.

“Most of the horses were a body score 1; they were very thin. They also had long, cracked feet and were infested with lice and worms. There is no doubt in my mind that they had been severely neglected.”

Since arriving into the care of World Horse Welfare, the horses have progressed well and after a period of recovery and rehabilitation, it is hoped that they can all find loving new homes.

World Horse Welfare and the RSPCA led the rescue operation, with a number of other equine charities helping.