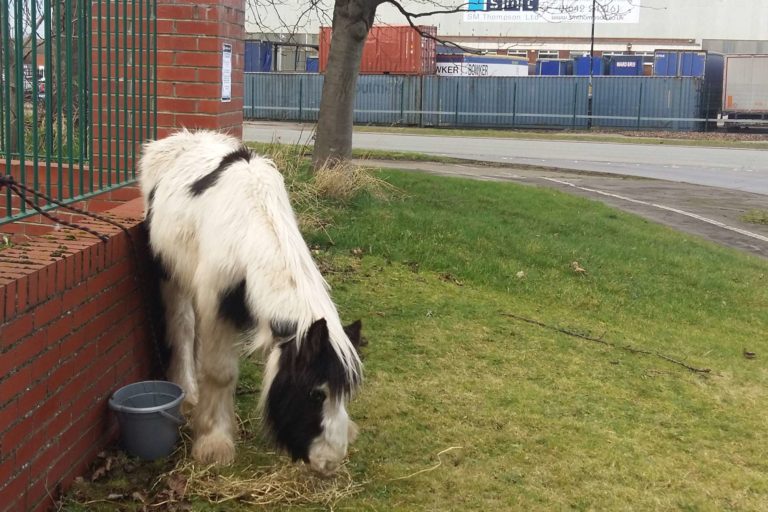 In late February, a caller to the charity’s welfare line alerted World Horse Welfare Field Officer, Sarah Tucker, to a young colt tied to railings at an industrial estate in east Middlesbrough.

When Sarah arrived she found the colt, now named Diamond, extremely weak and underweight tied tightly to a fence after he had been discovered wandering the streets.

“Diamond was clearly only a matter of months old, far too young to be without his mother and suffering badly from poor nutrition. His bones were sticking out through his thick, fluffy coat and his demeanour was dull and lethargic. He was clearly in urgent need of veterinary attention and as we couldn’t locate an owner, we worked with the RSPCA to post an abandonment notice before transporting him to a safe location nearby.

Another welfare caller alerted Sarah to the second pony, named Quartz, just a few days later after he was discovered loose in a poorly fenced field near Pontefract and close to the busy A1. Sarah arrived to find a very weak and underweight young pony.

“Quartz was clearly very unwell, scouring badly and appeared to be suffering from worms but he was also unhandled and very nervous so I couldn’t get close enough to properly assess his condition. I was also worried about him becoming frightened and getting onto the A1 so I contacted fellow equine charity, Bransby Horses, who attended with their penning system to help us safely contain and catch him. Once he was in the safety of temporary boarding stables, he was assessed by a vet who found him suffering a dangerously high temperature and a severe worm infestation.

“Once Quartz was strong enough, he travelled to World Horse Welfare’s Penny Farm Rescue and Rehoming Centre where he is doing really well and growing healthier every day. As with Diamond, no owner could be found so he is now in the care of World Horse Welfare. The plights of these two young ponies within a matter of days of each other, shows the scale of the welfare challenges facing our equine population and highlights the importance of people keeping alert for horses in need of our help.

“As a team of 16 Field Officers covering huge geographical areas, we rely on the public to be our eyes and ears. Reporting welfare concerns is essential in helping ensure we can reach as many horses as possible and in this instance it is thanks to two callers that both Diamond and Quartz are now safe, well and ready to have sparkling futures!”

If anyone is concerned about the welfare of a horse they can call World Horse Welfare’s welfare line on: 0300 333 6000.