A bright future ahead for ponies rescued from sanctuary

137 horses and ponies have been rescued in a large multi-agency operation. 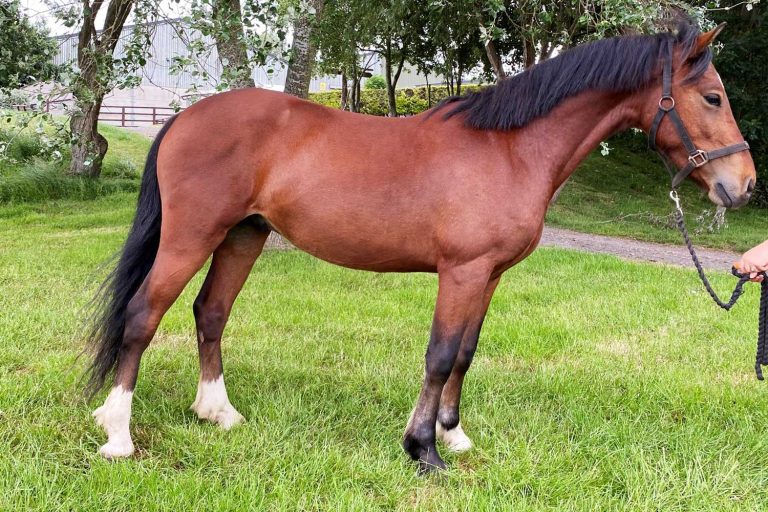 As three-year old Frankie walked confidently up into the trailer that was leaving World Horse Welfare’s Penny Farm Rescue and Rehoming Centre to take him to his new rehomers, it marked a major milestone. Little Frankie was the last of the horses from Penny Farm that had been rescued by World Horse Welfare from a sanctuary in 2019 to be rehomed.

When 13.2hh Cilybebyll Frankie was rescued in November 2019 he was underweight, with a high worm burden and overgrown feet and was terrified of human contact. It has taken a lot of time and experienced nursing and handling in the charity’s care to turn him into the happy, healthy and confident young pony that he now is. Frankie was one of 137 horses and ponies rescued in a large multi-agency operation in south Wales alongside RSPCA, Redwings, the British Horse Society, the Horse Trust, Blue Cross, The Mare & Foal Sanctuary and The Donkey Sanctuary.

The rescue from a sanctuary called Whispering Willows came about as concerns were raised over the welfare of the animals kept there. Visits were made to assess the horses and attending vets agreed that the conditions were not suitable and that many of the animals were suffering and had been for some time.

The owner of the sanctuary, Sandra Jane Kvaerneng Stolp, has since pleaded guilty to four offences under the Animal Welfare Act, on February 15th this year and has been banned from keeping all horses for 10 years and ordered to pay £1,000 in costs and a £90 victim surcharge. She must also serve a tagged 20-week curfew and must not leave her home between 9pm and 6am.

“It’s always wonderful to see ponies that came in to us in such a poor state reach the stage where they are ready to move on to the next phase of their lives in the care of rehomers. Seeing the contrast between the terrified little things that arrive and the confident, healthy animals that leave us really shows the amazing work the team does in turning these animals around but the reality is that it’s taken a while to get to this point and that illustrates just how much effort, time and resources are needed to care for these animals properly.”

Where possible, all of the other ponies from this rescue have been rehomed and are facing a similarly brighter future. Just like Frankie, Barbie and Dec were underweight, poorly and terrified when they arrived at Penny Farm, but both were rehomed together just before Christmas by rehomers Heidi and her family.

“I was only intending to get one companion pony for our horses, but when I saw Dec and Barbie together my heart melted. They are so sweet and I cannot repeat often enough what incredibly well-mannered ponies they are. The team at Penny Farm have done an amazing job, the ponies are in fantastic condition and they lead in headcollars better than any of our horses do. They run to the gate to see us when we come to take them in, they are so friendly!”

Youngsters like Frankie, Dec and Barbie can take a while to find homes once they’re ready for rehoming as people can be put off by their age but, as Dec and Barbie’s story shows, being young doesn’t mean they don’t have great manners. In fact, youngsters can be incredibly rewarding to rehome as you’ll see their personalities grow as they do – and often a wonderful bond can develop between the rehomer and their young horse or pony too. If you could offer one of our youngsters like Frankie, Dec and Barbie a loving home, check our rehoming site out now.

The new bill to enable tougher prison sentences for the worst animal cruelty offences will be introduced to Parliament.

A large herd of forty ponies has been taken in by rescue charities after the sudden death of their owner.