Ten unique horse sculptures will be enjoyed by visitors to the 2019 Royal Windsor Horse Show. 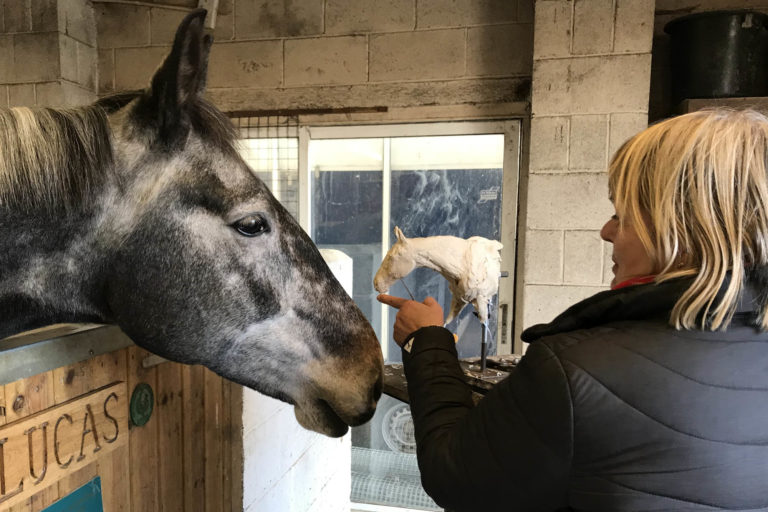 Sculpted by renowned sculptor, Judy Boyt, the ten horses stand just over a metre tall with each one telling the story of a different aspect of the charity’s work improving horses’ lives – from Raju a working horse from the brick kilns of Nepal, designed by Deborah Meaden with Jan Jacquelin and Georgina Leigh to Frodo, the frozen foal who is now a showring champion designed wrapped in blankets by Jennifer Bell. Adults and children alike will be able to follow the trail by picking up a map from a number of locations around the show, taking them on a tour of all ten sculptures and bringing the inspiring stories to life.

The muse for the sculptures in the trail is rehomed competition horse, World Horse Welfare Lucas, who was rescued as a youngster from a frozen field with his mother, both of whom were fighting to survive the harsh winter weather. Lucas is now transformed and regularly competes at British Eventing with his rehomer Colleen in Fife, Scotland. Judy travelled to meet Lucas and live-sculpt him late last year before creating an 11hh sculpture back home in her Wiltshire studio which was then used to create the mould for production of the fibreglass sculptures. The real life Lucas himself will be competing at the Royal Windsor Horse Show on Thursday in the Working Show Horse class, and Frodo the foal discovered frozen just over four years ago will also be competing in the coloured horse classes – both flying the flag for rescue horses everywhere.

One of the sculptures will be on World Horse Welfare’s trade stand A194 for show visitors to take a hand in creating by colouring in the intricate horseshoe pattern, painted by tattoo artist Judi Milne. ‘The People’s Horse’ represents Lucas’ story and features black and white horseshoe outlines submitted by members of the equestrian community which are ready to be brought to life in technicolour by budding artists at the show.

Ten of the 11hh (111cm) sculptures will form the ‘Show Trail’ which will be exhibited at the Royal Windsor Horse Show (8th – 12th May) and will then travel to a number of other events during the year. Ten additional sculptures are already on display throughout the towns of Windsor and Eton until the end of July and will then travel to Kensington and Chelsea for the rest of the summer. 20 miniature 35cm high horse sculptures will also feature across World Horse Welfare’s four Rescue and Rehoming Centres in Norfolk, Somerset, Lancashire and Aberdeenshire.

“Following the success of our 2016 Invisible Horse Trail, we wanted to create something even bigger this year as a positive and engaging way of sharing our work with a much wider audience and celebrating our partnership with the Royal Windsor Horse Show this year. The horse sculptures are a fantastic visual way to show all the different aspects of how we help horses both in the UK and around the world, as well as celebrating some of the inspiring stories of rescued and rehomed equines.

“We’re delighted to be working with Judy Boyt again and so grateful to her and all the artists, celebrities and sponsors who are helping us with the sculpture trail this year. We can’t wait to see many people enjoying the trail across the Royal Windsor Horse Show and we hope visitors will also enjoy meeting the real-life trail inspirations Frodo and Lucas across the four days too.”

World Horse Welfare would like to thank The Beaverbrook Foundation for their kind support of the World Horse Trail.

A unique trail of 10 horse sculptures will be galloping into the towns of Windsor and Eton this Easter weekend as part of charity, World Horse Welfare’s ‘World Horse Trail’.