A man from Leeds has been jailed for causing suffering to a pony he overworked to the point of exhaustion at last year’s Appleby Horse Fair. 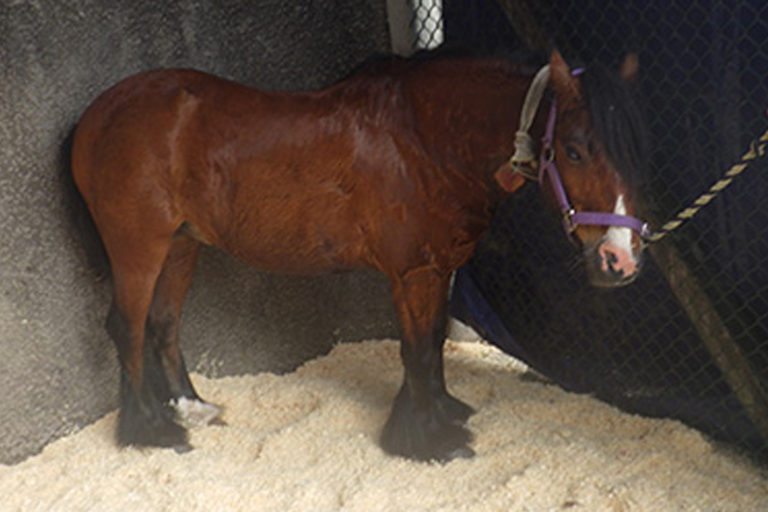 A man from Leeds has been jailed for causing suffering to a pony he overworked to the point of exhaustion at last year’s Appleby Horse Fair. Little Ginger also had mouth injuries.

He was sentenced to 90 days in prison and disqualified from keeping equines for six years, suspended for six months to give time to sell or rehome his horses. He was also deprived of Little Ginger. He was ordered to pay £500 costs and a £115 victim surcharge.

“Little Ginger (pictured above at Appleby) was found to be severely exhausted, suffering from hyperthermia and dehydration as a result of being overworked and needed immediate veterinary treatment.

“He was very dull with his head held low and barely responding. He was standing but didn’t want to move. Vets said his temperature and breathing rate were both severely raised and his heart rate was dangerously increased.

“He was put on a drip and given drugs to help bring the hyperthermia under control but it took him hours to recover.

“If the owner had carried on working this pony he probably would have collapsed.

“On top of that, when vets examined him further they found he had trauma to the inside of both cheeks due to his teeth not being rasped.”

In mitigation, the court heard that the owner respects the work of the RSPCA and had only run Little Ginger up and down the hill once. With regards to Little Ginger’s teeth he said that he was overweight so wasn’t struggling to eat or showing any difficulties with his bit.

The cob gelding was taken to the safety of our Penny Farm Rescue and Rehoming Centre and has made a great recovery. We hope he will be ready to be rehomed in the near future.

“Ginger is doing really well and has thrived through his rehabilitation. He’s a lovely character who gets on well with his equine and human companions and loves nothing more than grazing out in the field. He’s very happy go lucky and has great potential as a riding or driving pony in the future.”

The cardiac recovery index test – which is widely used in the endurance field to assess horses’ fitness to go on working and levels of recovery – was brought in at last year’s Appleby Horse Fair to check the condition of horses who vets were concerned about.

“We will be using the tests again at this year’s fair.

“We very much want to educate owners to ensure that they’re resting their horses and providing them with a drink but we aren’t going to tolerate them being overworked to exhaustion.

“If they look like they are, we will be pulling people up on it, as we did here.”

This year’s Appleby Horse Fair is taking place between 6 – 12 June and World Horse Welfare Field Officers will be in attendance, along with the RSPCA, Redwings and other equine partner charities.

Woman banned from keeping all animals for indefinite period

A woman has been disqualified from keeping all animals for an indefinite period after she failed to provide veterinary care for her lame horse.