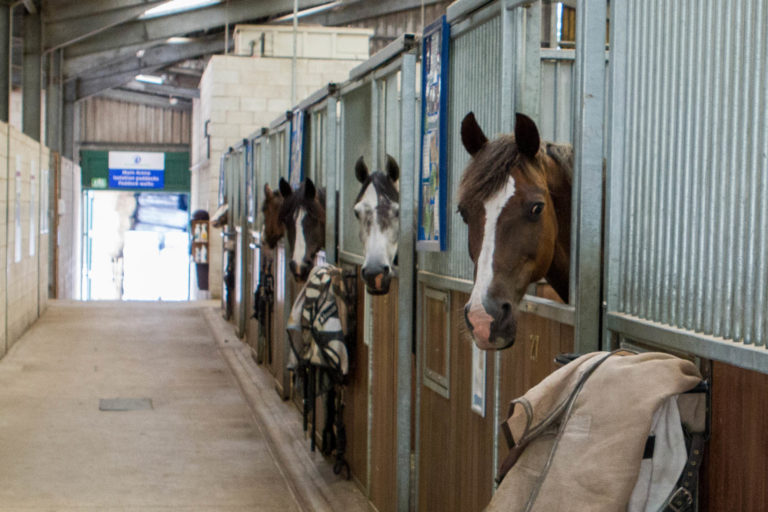 Scientists discovered that horses who were housed individually with little or no contact with other animals showed significantly higher signs of a stress response. Kelly Yarnell, an expert in equine welfare at Nottingham Trent University said:

“Inadequate housing design potentially causes stress and negative consequences on the health and well-being of horses, despite the fact that it can be easily addressed by introducing more windows or shared areas. Group housing provides horses with an environment where they are able to display natural behaviour, and contact with other horses improves overall welfare.”

In response to the findings our Chief Executive Roly Owers says:

“World Horse Welfare welcomes this study as it supports what we have been highlighting for some time: poorly managed stabling can cause significant welfare problems.  Whilst we believe that stabling does have an important and beneficial role to play in the wide variety of ways that we can manage horses in the UK today, this must be done responsibly. This study provides plenty of food for thought, although we should be mindful of not reading too much into any single piece of research, not least because horses are individuals and what suits one animal does not necessarily suit another.”

“Most of our horses live out in groups with access to field shelters all year round.  For those who need to be stabled we have large open-sided crew yards at each of the Centres where horses can be kept in small groups of up to three or four, and horses who are kept on their own can easily socialise over partitioning walls.  However, it is sometimes necessary to keep our horses in stables for their own welfare but a combination of good management and constant assessment to make sure that all their needs are being met is essential to the mental as well as physical health of the horse.”

Some of the key issues to consider with stabling include:

Welfare challenges with stabling are not just a UK issue, as evidenced in a soon to be published report on Europe’s equine sector prepared by us in partnership with Eurogroup for Animals.  This makes it all the more encouraging that Julie Girling MEP is producing a proposal on responsible equine ownership and care for the European Union, which will highlight the need for guidance on good stabling practices.

“We should not lose sight of the key issue involved here, namely the needs that horses have for social interaction.  It is totally unacceptable to house a horse all-day in a stable with both top and bottom door bolted; however we would also seriously question a horse kept out at pasture 24/7 without any companionship.  Clearly equine companionship is a great option but people and other animals can play a role here too.  Above all we hope that this research, published in a highly respected scientific journal, will promote an informed debate about the role that stabling can play in caring for our horses.”

Project takes first step towards lightening the load for horses

Last week (4 – 8 September) researchers have taken the first step towards tackling the issue of rider weight, investigating whether there are any short term measurable differences when horses are ridden by different sized riders.

On Thursday November 11th 2021 at 09:45 a stellar array of equestrian professionals and supporters - and World Horse Welfare's President Her Royal Highness The Princess Royal - come together live and consider ‘Whose Opinion Matters?’

Hall Farm Yard Supervisor Adele tells us how clipping can be a really useful weight management tool, especially for horses and ponies who can’t be worked.