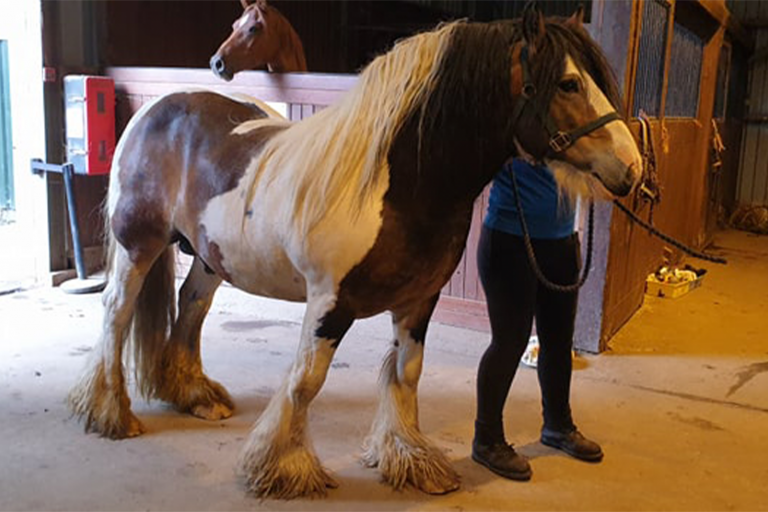 Months of recovery have paid off for four obese ponies who came into the care of Belwade Farm, World Horse Welfare’s Rescue and Rehoming Centre in Aberdeenshire after their owner recognised that she was struggling to care for them.

Bombay, a handsome skewbald 5-year-old cob, weighed an astonishing 610kg on arrival and needed to lose the equivalent of two full-grown adult humans before he could be considered to be a healthy weight. The professional teams at the centre assess each pony and a weight-loss programme will be put together with restricted, low-calorie forage-based foods alongside an exercise plan which, in the initial stages of weight loss must be very gentle to enable joints to tolerate it.

After months of gradual weight loss, rehabilitation and learning basic handling and manners – essential to enable these ponies to be rehomed successfully – Max and Fontelroy are now happily rehomed together. Bombay has recently been rehomed as a companion and Chancer, having returned to Belwade following his rehomer’s change in circumstances, is currently recovering from a small operation. It is hoped that once he has made a full recovery he will be available for rehoming once again.

“In many ways overweight horses are harder to deal with than underweight ones – it is a real challenge to help them lose weight and increase their mobility. Weight loss is crucial but must be done slowly and carefully and it is likely that these ponies will need their diet manged carefully for the rest of their lives. Also, Bombay and Chancer, like so many of the ponies that come in, were not used to being handled, and hefty stallions will use their weight whenever they don’t want to co-operate. It’s a real testament to the teams here that these ponies came round so quickly and accepted handling and learned manners, making it easier for us to help them, but also ensuring that they have a future.”

Following the death of the owner’s partner, who had been the ponies’ main carer, World Horse Welfare was contacted and the four ponies, including Bombay and Chancer, were taken to Belwade. All four were coping with a number of welfare issues, including poor feet and parasite burdens, and all were morbidly obese.

Excess weight is often overlooked as a welfare concern but being overweight puts horses at risk of a number of conditions, such as the excruciatingly painful and potentially fatal illness laminitis, as well as putting huge extra strain on their joints. Any horse coming into one of the charity’s Rescue and Rehoming Centres will need a long, slow rehabilitation and, if overweight, this can take many months.

The skilled and dedicated teams at Belwade, and the three other World Horse Welfare centres in Lancashire, Norfolk and Somerset, help around 300 horses and ponies each year and Chancer and Bombay’s’ film shows what an incredible transformation that care and work achieves, but it is not possible without public support.

Although the centres reopened to the public in mid-August, they had been closed for 18 months due to the pandemic, but staff at the farms continued to take in, care for and rehabilitate horses like Chancer, Bombay, Max and Fontelroy despite seeing a 20% drop in income over the last year.

Recovery and rehabilitation can take many months, and involve a whole team of grooms and specialists before the horses and ponies are healthy and ready to be rehomed. If you would like to support the work of the teams at our Rescue and Rehoming Centres you can click here to find out more about ‘Sponsor a Stableyard.

Finley was very nervous when he came into our care

Finley has been transformed since he came into our care. Will you help other ponies in need this winter?