Moses has been transformed into a stunning, cheeky young cob and is now Sponsor a Stableyard cover star. 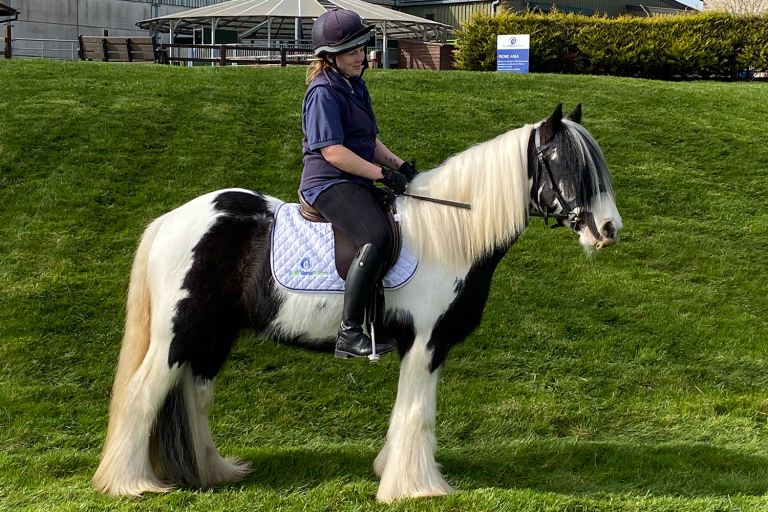 Little Moses is a real character and a firm favourite at World Horse Welfare’s Penny Farm Rescue and Rehoming Centre in Lancashire and this week has claimed his place as the cover star of World Horse Welfare’s ‘Sponsor a Stableyard’ campaign. The handsome, cheeky black and white pony is a far cry from the sorry sight that greeted World Horse Welfare Field Officer Charlotte Melvin when she visited a group of cobs near Walsall back in October 2019 after a member of the public reported concerns for their welfare.

With time and care Moses was able to make a full recovery from his horrific head injury under the expert care of the Penny Farm team and his amazing personality really began to shine through. It also made him the obvious choice for the campaign encouraging support for the stableyards that provide the vital care and treatment for the horses and ponies like Moses. Recovery and rehabilitation can take many months at the stableyards at the charity’s four farms before the horses and ponies are healthy and ready to be rehomed.

Moses first came to World Horse Welfare’s attention when Field Officer Charlotte noticed a strong smell of infection when she approached the last pony on the site and discovered the two-year old pony’s headcollar had been allowed to become very badly embedded in the top of his head, causing a severe wound which became infected and infested with maggots. Moses was removed under Section 18.5 of the Animal Welfare Act and transported to the vets for urgent treatment. He remained there for four days due to the extent of the injury caused by the headcollar, before being transported to Penny Farm where he has been in the care of World Horse Welfare ever since.

Moses’ owner pleaded guilty to causing unnecessary suffering to a protected animal and was banned from keeping horses for ten years, given a 12-week suspended sentence and ordered to pay a contribution towards prosecution costs of £400 and carry out 60 hours of unpaid work.

“Given how horrific the wound from his headcollar was, I’m really happy with the recovery Moses has made. Moses’ suffering could so easily have been prevented and it’s awful to think that he could have been left like that if someone hadn’t cared enough to report the situation.

“Please consider sponsoring World Horse Welfare’s Penny Farm to enable us to give ponies like Moses the best chance of finally being placed into a loving home for the rest of their lives. Your donations make such a difference.”

To find out more visit www.worldhorsewelfare.org/sponsor

The skilled and dedicated work the teams do at Penny Farm, and the three other World Horse Welfare centres in Aberdeenshire, Norfolk and Somerset for around 300 horses and ponies each year is not possible without public support. Even while the charity’s visitor centres have been closed due to the pandemic, staff at the centres continued to take in, care for and rehabilitate horses like Moses despite seeing a 20% drop in income over the last year.