A large herd of forty ponies has been taken in by rescue charities after the sudden death of their owner. 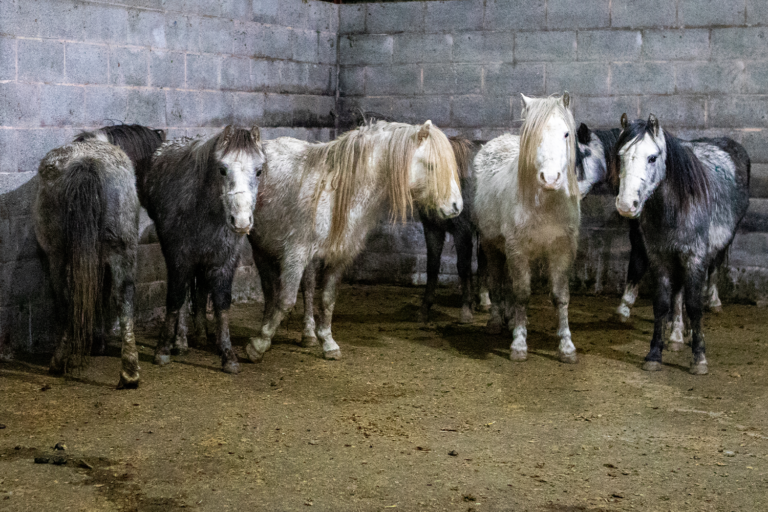 World Horse Welfare was contacted about the ponies late in 2021 and it quickly became clear that the owner’s distraught family was unable to take on their day-to-day care. Despite this, however, the family was concerned for the ponies’ welfare and extremely keen to do the right thing for them and consequently signed them over into the charity’s care.

Finding space to take in 40 ponies at once is a huge challenge and so through NEWC (National Equine Welfare Council), World Horse Welfare began immediately to liaise with other animal welfare charities to arrange suitable accommodation. In December, World Horse Welfare and HAPPA worked together to round up the Welsh Mountain Ponies from the farm in North Wales and, after a vet had checked that they were fit to travel, their journeys began.

World Horse Welfare was able to take in 14, which were moved to the charity’s Penny Farm Rescue and Rehoming Centre near Blackpool. HAPPA took in six ponies, and two other charities stepped in to house the remaining ponies, with five going to Bransby Horses and the remainder to Blue Cross. One pony was rehomed directly to a friend of the family.

“Cases involving large numbers of horses or ponies are unfortunately frequent, and always pose a logistical problem to find spaces to take them all in at one time. The fact that we were able to find places for them is testament to the way all the different organisations involved through NEWC work together. This case also highlights the importance of considering that difficult thing: what will happen when we are no longer there? – and making plans for the provision of your animals once you are gone.”

“It is always a pleasure working alongside my World Horse Welfare colleagues supporting them offering our resources and enabling such great teamwork. Especially in today’s difficult equine welfare climate, working in collaboration is key to getting the job done. The task involved in the round up of large groups can be extremely challenging and is reliant on a knowledgeable, proficient team working in harmony with each other; likewise, HAPPA equally works with World Horse Welfare calling on their resources to assist us on equine operations where necessary. The ponies have really settled into HAPPA’s Rescue Centre, Shores Hey Farm, where they will continue on a Rehabilitation Journey, learning to interact and socialise under the guidance of our Equine Team”.

“As members of NEWC we understand the importance of joining forces as a collective to respond to large welfare cases such as this. We are forever grateful to our loyal supporters for the regular donations that make it possible for us to able to provide these animals with the care and love they deserve.”

“We are happy to join other charities whenever we can when large groups of vulnerable horses need rehoming. This family did absolutely the right thing in getting help for this group and no owner should find themselves abandoning horses when they can no longer cope as charities will always offer support whenever possible. Eleven geldings went to our Burford Centre and a mare and foal are with the Rolleston team and will soon be looking for loving new homes.”

All the ponies have been given thorough health checks and the 14 at World Horse Welfare’s Penny Farm are now well on their journey towards rehabilitation. They are becoming used to being handled and can be seen by visitors to the centre. It is also believed that some of the mares are pregnant, so the team at Penny Farm is expecting some more pint-sized ponies to be born in the coming months.

The aim for each pony at World Horse Welfare is that when they are fit and ready they will be able to be rehomed. Rehoming a horse is an immensely rewarding experience and offers the horse or pony a vital second chance, as well as making space in the farms for more horses that desperately need help to be taken in.

World Horse Welfare’s rehoming website sets out the rehoming process clearly and makes applying straightforward. Rehomers receive an honest assessment of their chosen horse and their capabilities, as well as ongoing support and the reassurance that if their circumstances change, the rehomed horse can be returned to World Horse Welfare. Visit our rehoming pages here.

World Horse Welfare Field Officer Nick White is used to dealing with the many horses living in London, and knows from past experience that anything can happen and usually does.