World Horse Welfare Field Officer Nick White is used to dealing with the many horses living in London, and knows from past experience that anything can happen and usually does. 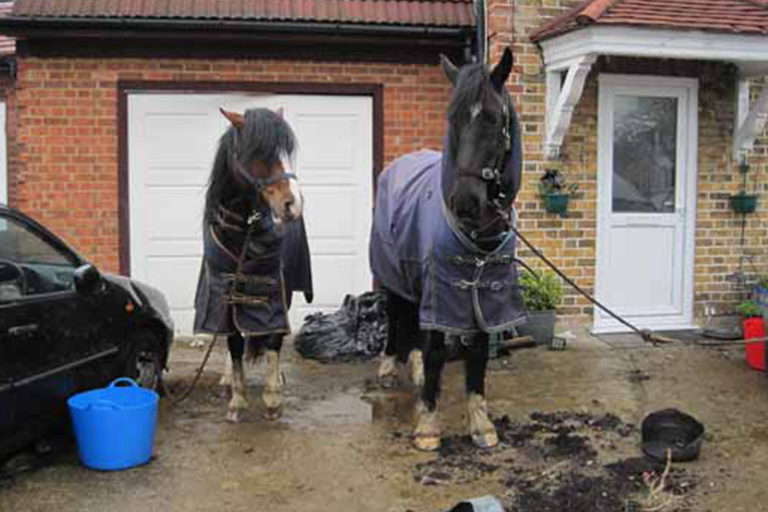 When he got the not too unusual call: to check on two horses in a garden, he was on his way.

Little did he know that when he was to arrive in Southall he’d find a 16hh Friesian-type gelding and a 15hh Welsh cob, both tied to the wheels of cars on the front drive of a house, next to a busy main road.

“The cob was tied with rope to the driver’s side front wheel but the rope was stuck under the engine, coming up under the passenger side wheel arch, meaning he could not raise his head more than a few inches from the ground. The Friesian type was slightly better off and managing to forage from the flower pots.

“After untangling the cob, I eventually woke the owner up on Thursday April 11th and discovered that he was planning to leave the horses there until the following Saturday, which was a further two days. He was hoping to build a wooden shelter for them on the drive next to the road. I offered him some very specific advice and an imminent time limit in which to take it.

“Much to my relief, the owner took my advice of finding pastures green for them within the time limit. I watched with the rest of the street as both horses were seen being ridden off into the sunset towards Heathrow airport.”

Nick White has seen Military Police horses performing ceremonial and operational duties during more than thirty years’ service as a mounted police officer. He’s witnessed everything from the riding horses in Hyde Park to dray horses pulling beer and coster ponies pulling scrap metal. Then there’s the hundreds more that live in stables all over London or graze in the fields directly under the flight paths next to Heathrow airport.

But even with all this experience he’s never seen two horses tied to cars on someone’s front drive – a bizarre welfare concern, but a welfare concern nonetheless.

World Horse Welfare is very pleased that a member of the public alerted them to this situation and that Nick was able to resolve it. A warning has been issued to the owner, stating that they must not return the horses to the site.

If you have any queries or worries about a horse in the UK, please call our freephone Welfare Hotline on 0300 333 6000.

Equine obesity is an increasing but under-recognised welfare issue in the UK.