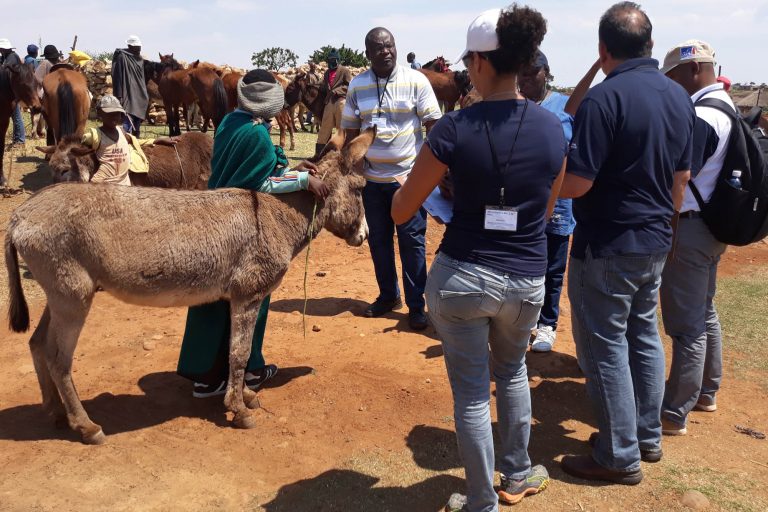 A lot of work went into organising the International Coalition for Working Equids (ICWE) workshop in October, both from the UK and once we were on the ground in Lesotho. I was a bit nervous on the day in case things didn’t go quite according to plan or we got off schedule but thankfully all went well!

With representatives from 24 countries attending, the workshop provided a chance for the Focal Points (representatives of Veterinary Services who work on veterinary and animal welfare policy) to see how the new World Organisation for Animal Health (OIE) Chapter on Working Equids could be used to improve working equid welfare.

It was great to see that the case studies generated a lot of interest amongst the delegates and started off discussions which continued for the rest of the event. After the case studies we had site visits to two communities that our project team are working with. The delegates met around 300 working horses and donkeys and their owners and were shown how to make welfare assessments using the new OIE Chapter.

The site visits were a great opportunity to showcase the work of our project alongside the University of Lesotho and we were delighted that there were clear signs that the 300 working equines we saw are benefitting from involvement with our project.

We were really pleased with how the workshop was received, as the Focal Points all participated with real enthusiasm and left keen to look at how the new Chapter could be applied in their own countries. I think we can call that a successful outcome, so all the planning paid off!

Today World Horse Welfare welcomed Defra’s announcement that CCTV will be made mandatory in all English slaughterhouses.

The International Coalition for Working Equids (ICWE) hosted an event at the United Nations Africa Regional Forum on Sustainable Development.