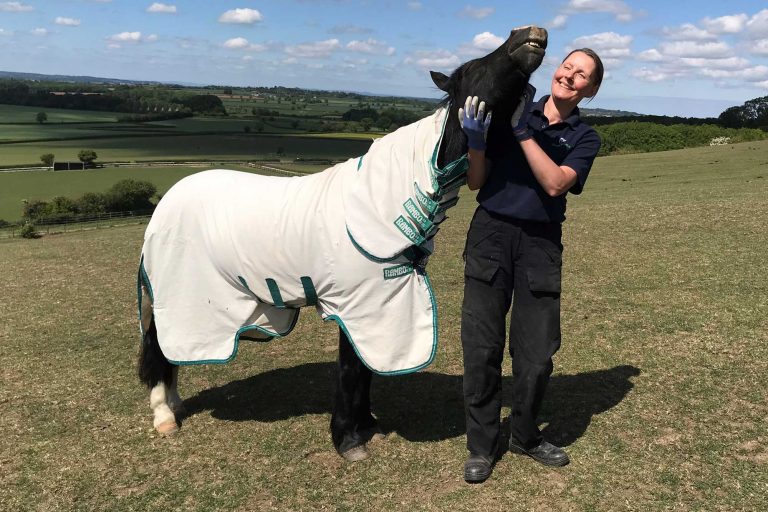 Since we started getting warmer weather in the spring, anyone who cares for a horse or pony afflicted with sweet itch will be very aware that the midges have come out in force. As sweet itch unfortunately can’t be cured, prevention is definitely the best course of action.
Whilst sweet itch can affect almost any horse or pony, research shows that it is particularly prevalent in some native breeds. It is the most common allergic skin disease in UK horses and affects around 5% of the equine population.

Preventing your horse or pony from being bitten in the first place is vital as early action will give you a much better chance of managing sweet itch effectively. If you know your horse or pony suffers from sweet itch, it’s really important to get their fly rug on in good time in the spring. It’s much more difficult to bring sweet itch under control again once it has flared up and this can easily be prevented by putting their fly rug on before they start to show signs of irritation. If the fly rug only goes on once the pony has started to rub, it’s too late!

One of our ponies, Gracie, was suffering really badly with sweet itch when she arrived but now we have her managed appropriately she can live out 24/7 year round without a problem. Like Gracie, some of the worst-affected horses and ponies may need to wear their fly rugs 24 hours a day during the months when the insects which cause sweet itch are active, so it’s well worth investing in a rug which is comfortable, well-fitting and hard-wearing. It should also have a large belly flap, as it’s important to keep the pony covered up as much as possible.

When Gracie came into our care one of the first steps in helping make her more comfortable was to give her a bath – once the affected skin was clean we could begin to treat it. We tend to use something like Dermoline or Coatex, as these shampoos are gentle and soothing so they get her clean without aggravating her skin at all. It’s really important to always patch-test any new product you use on your horse, especially in any sore areas.

Now her sweet itch is managed properly, Gracie only needs to come in for a bath once a fortnight – and as soon as she’s dried off, her fly rug goes back on and she can go back out to her field. Depending on how her coat is looking, she may only need the areas that she rubs washed, rather than having to have a full bath every time.

Gracie has Neem Shield Cream applied on a daily basis to the areas she rubs – this is a soothing balm which helps to keep the skin in good condition and heal any sore patches. It can also be used as a barrier cream and Gracie has it applied around her udder, as this is one area which her fly rug doesn’t protect. Another benefit of this balm is that it’s non-greasy, so won’t get all over your tack if you ride your pony!

With this routine in place, Gracie can now live out throughout the months when biting insects are active – which is incredible considering how bad her sweet itch was when she first arrived and shows that sweet itch can be managed quite easily once you have an appropriate routine in place.

Another factor which should be considered is where your horse or pony is kept, if you know they suffer from sweet itch. If possible, it’s best to avoid paddocks near standing water or those which are very sheltered, as areas with still air have a much higher midge population than those which are naturally more windswept. That said, we have a lake here at Glenda Spooner Farm and Gracie still lives out quite happily, which highlights that as long as you plan your sweet itch management early enough in the year you can keep on top of it. We start monitoring Gracie very closely in March and her rug goes on as soon as the weather warms up enough for there to be any insect activity.

Whilst sweet itch can put potential rehomers off, we find that it’s actually a very manageable condition once the pony is in a routine. It often leads to an even stronger bond between the pony and their groom – so can in fact have some positive aspects!

If you’d like more advice about managing sweet itch please do give our Advice Line a call in office hours on +44 (0)1953 497238 and one of our team will be very happy to help. If your horse or pony is really struggling with sweet itch, talk to your vet – probably via telephone consultation in the first instance at the moment.

Watch a series of lectures on laminitis by some of the world’s leading authorities on the condition.