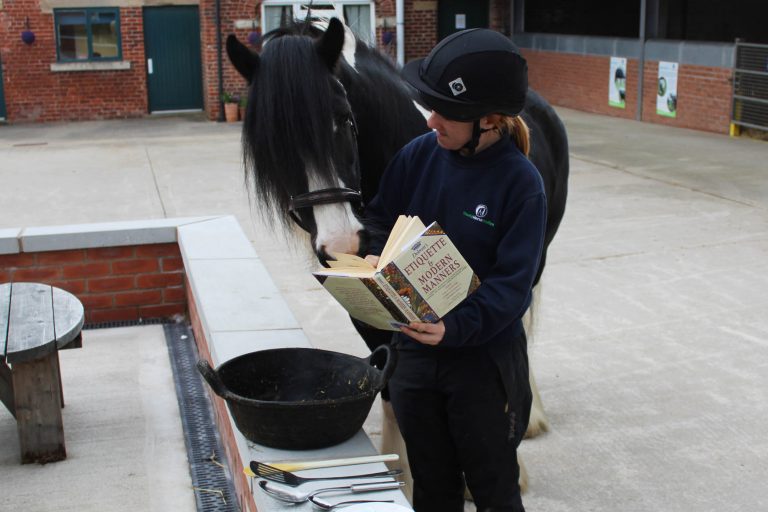 When Frodo was crowned Rescue Pony Champion at Equifest, having already hit the headlines once in his life when he was found, collapsed, frozen and close to death, by our Field Officer Rachel Andrews, it seemed clear Frodo was destined for a life in the spotlight! As well as his conformation, his temperament seemed perfectly suited to the show ring, so we decided that we would aim to get him to Royal Windsor Horse Show 2019 as the next step on his showing journey.

Because Frodo is prone to weight gain, he lives outside unrugged with his friends. Now that we’re going to more shows together I have to suffer the consequences as he can make the smallest puddle of mud go a long way! However, he’s a really sociable pony who is happiest living out and thrives on grass and once I’ve given him a good bath his coat and feathers gleam. We also keep his mane really long in the traditional cob style, which looks amazing after a wash and a brush.

Since Equifest Frodo’s show schedule has become quite busy: as well as preparing to compete at the Royal Windsor Horse Show, where World Horse Welfare is the show’s official supported charity, he’s currently competing in the SEIB Search For A Star qualifiers for The Horse Of The Year Show (HOYS) in October. This is an amateur showing series in the lead up to HOYS, but the standard is incredibly high so we both have to be fit, prepared and immaculately presented at each outing. As well as the requisite muck-out, bath and groom on the morning of the show, our preparations in the weeks leading up to these outings include lots of schooling and hacking…and of course tack cleaning! He rides in an Eggbutt snaffle bit, but I’m introducing a double, which is more suitable for the show ring.

The whole team is really encouraging and wants Frodo to do his best, but I have no expectations of him as I’m so happy he’s made it this far. Most horses who have only known love and the highest standards of care don’t achieve what he has, so to think of all he’s been through and what he’s achieved it’s a real miracle. I couldn’t ask for any more. Given the atmosphere at these shows can be quite tense, with lots of new sounds and smells, Frodo has never put a foot wrong.

I feel really excited before I go into the ring. I don’t get nervous, but I do get emotional when he does well because I know how far he’s come and how hard he tries. He has a heart of gold and whoever goes on to rehome him is the luckiest person and I hope will continue to challenge him, have fun with him and of course love him as much I do. The biggest treat for him is time to have fun.

Ethical Framework for the use of horses in sport unveiled

More than 90 leaders from equine sport, the veterinary profession, academia and the media contributed to a workshop on 4th October 2021 where an ‘Ethical Framework for the Use of Horses in Sport’ was unveiled.

While dozens of flood warnings remain in place across the UK, it is not just people that bear the brunt of the drastic weather.